“In the last forty years the IBEW CCO has grown and established itself as the leader in the electrical construction and maintenance industry.”
– John Grimshaw, Executive Secretary Treasurer

The IBEW CCO has brought many changes to the unionized electrical industry, including better training and education, provincial safety standards, and better pay. Since the IBEW CCO and the ECAO (Electrical Contractors Association of Ontario) Joint Proposal in 1992, no members have lost work hours due to strikes or lockouts.

In the 1960s and up to 1992, the electrical industry was very different than it is today. Strikes and lockouts were very common throughout the large-scale construction industry. It was bad for workers, bad for employers, and bad for the general public.

“I look forward to the many challenges in the years to come as we continue to grow our membership along with signatory contractors across the province of Ontario.”
– James Barry, Executive Chairman

Prior to the formation of the IBEW CCO, every union local had to fend for themselves at the bargaining table. Added to that challenge is the fact that bargaining is an expensive process, involving lawyer’s fees, and sometimes fees for economic and other experts.

Former Executive Chairman of the IBEW CCO, Patrick Dillon, takes up the story. “As electricians, we found that employers across the province from all trades wouldn’t go past certain monetary positions commonly known as pattern settlements. An employer bargaining agent would reach a settlement with their trade union, and the rest of the employer bargaining agents seemed to have an internal agreement to stick to that.”

John Pender, IBEW CCO’s Executive Secretary Treasurer from 1995 – 2010, agrees. “It was a very disruptive time. The contracts with the different locals ended at different times of the year, so it seemed there was always a local on strike, considering there were 26 trades, each with multiple locals.” 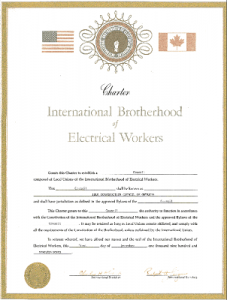 The result was an environment of ongoing strikes, and thousands of wage-earning hours lost on the picket line for IBEW members.
“I think it helped the non-unionized contractors grow,” says Pender. “Because all the strikes jeopardized timelines for the large construction projects the unions were doing.”

The Ontario Minister of Labour at the time, Bette Stephenson asked Donald E. Franks to lead an Industrial Inquiry Commission into bargaining patterns. The resulting report recommended provincially-unified bargaining for every construction trade, and the legislation was passed less than two years later.

On December 1, 1977, the IBEW CCO received its Charter from the International Brotherhood of Electrical Workers.

That changed in 1992 with the adoption of the Joint Proposal bargaining system.

With this system, all members across the province vote every three years on whether to use traditional bargaining or the Joint Proposal bargaining system. Voting takes place well in advance of the end date of the contract, avoiding a potentially heated atmosphere.

If members vote in favor of the Joint Proposal, the no-strikes no-lockouts system is in effect while the negotiations take place. If the members vote down the Joint Proposal, then traditional bargaining is implemented, and a strike or a lockout could potentially erupt as soon as the contract ended. Dillon said, “That as the Executive Chairman of the day he would not support the joint proposal mechanism unless the members of the IBEW construction locals had a vote each bargaining round as to whether to use the joint proposal mechanism or not and that, that vote had to be on a one member, one vote system across the province.”

“If there’s a hero to this story,” Pender says, “it’s Professor Bernie Flaherty of Cornell University. He pioneered win-win bargaining. He had the information, and galvanized the business managers and the contractors. He turned the light on for a lot of people.

“On August 23, 1991, all ‘A’ members in good standing from across the Province of Ontario received a letter outlining the Joint Proposal procedure for collective bargaining, along with a mail in ballot, based on one man-one vote. The membership voted 74% in favour of the Joint Proposal.”

After the Joint Proposal came into effect, John Pender noticed a big difference. “We’d start negotiating early in February. By May we would have a settlement in place, and best of all, we set the rate. That’s what got us around the ‘street settlements’ made by other trades.”

The members evidently like the Joint Proposal system even today, as they have voted in support of well in advance of the expiry date of each collective agreement since its inception.
Patrick Dillon says the result has been positive. “Since 1992 no one has lost even one hour’s pay due to striking.”

“The no-strikes no-lockouts policy has brought peace to the electrical industry,” he continues. “The members, the owner-clients, and the general public have all collectively benefitted.”

John Pender notes there were other positive effects from the formation of the IBEW CCO. “There were two new funds: the Organizing Fund, and the Joint Electrical Promotion Plan, which is a wonderful communication tool.

“The Ontario Electrical Industry Training Trust Fund is also a result of the Joint Proposal. This funding has allowed Peter Olders, our Provincial Training Director, to develop provincial training programs like Network Cabling Specialist, Solar Photovoltaic and the Electric Vehicle Training Program. Thanks to that our members are the best trained in emerging electrical advancement.”

Over time, there have also been several increases member pay, including a 10% increase won in 1997.

John Pender agrees. “I would say that province-wide bargaining, while mandatory, worked as fairly as possible for everyone across the province. What we have accomplished within that envelope has been very beneficial. It’s brought harmony to the unionized construction industry.”

“In the last forty years the IBEW CCO has grown and established itself as the leader in the electrical construction and maintenance industry,” says John Grimshaw, Executive Secretary Treasurer. “As we proved at Queen’s Park in November 2016, where we coordinated a mass demonstration of 4,000 people with only a few days’ notice, we are a political force to be reckoned with.”

James Barry says, “The Construction Council of Ontario is a great resource of information and knowledge for all business managers and local unions across the province. As its Executive Chairman I am very proud to help and assist the local unions and our partners at the Electrical Contractors Association of Ontario. I look forward to the many challenges in the years to come as we continue to grow our membership along with signatory contractors across the province of Ontario.”

There’s an underground economy in the construction industry and it’s costing you money. The number of crooked contractors is on…